Fujian Jiatian Agricultural Development Co., Ltd is a provincial level leading company in agricultural industrialization, distinctively focused on king oyster Mushroom(Pleurotus Eryngii) research and development, combined with its production, processing and sales, claiming to be an integrated enterprise. Jiatian is located in Tianbian industrial Region of Jingcheng Town, Nanjing County, Fujian Province. Ever since its founding in 1993, with a registered fund of USD 10,000,000, Jiatian has sought to expand to cover an area of over 1,500,000 sq.ft, and taken a president seat in Mushroom Industrial association of Zhangzhou City.

With the daily delivery of 160,000 bottles, Jiatian has been made one of the biggest factories specified in bottle cultivation of the King Oyster Mushroom in China.

Mushroom industry is a world-wide acknowledged emerging green industry, a circular economy industry with characteristics of “short, flat, fast” in terms of economic, ecological, and social benefits. China is the world’s number one mushroom producer and exporter, accounting for 65% of the world’s total output. In Fujian Province, where there is a long history in mushroom cultivation, the total yield of mushroom is third-ranked, preceded only by vegetables and fruits. In response to the Agricultural Development Planning in the early 1995-2010, mushroom industry had been introduced as a key industry and supported primarily in the Adjustment of Agricultural Structure by the provincial government. 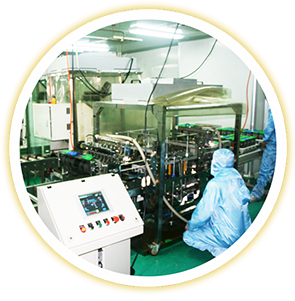 The corporate original legal representative Jiajin Yang, an agronomist, played the role of technical leader in mushroom cultivation and processing. As the first president of the Mushroom Industry Association, Vice President of Agricultural Products Association and the Leading Enterprise Association, Mr. Yang had made numerous achievements in mushroom R&D and popularization over the years. Our corporate technological development force comprises not only those from inside the company, but also expertise assistance from within the province. We have a long-term cooperation with the associate experts from the Provincial Agricultural Institute. Scientific research activities, covering both technology introduction and innovation, have been performed to achieve series of scientific discoveries with the combined forces. Plus our frequent communication with those in the same profession from Taiwan, learning their advanced technology and management experience, we have further strengthened our technical guarantee in project implementation. 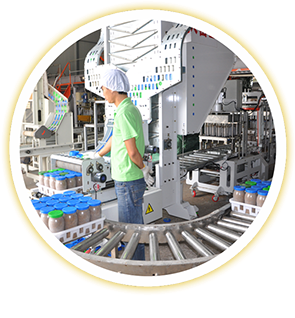 King Oyster Mushroom(Pleurotus Eryngii/King Trumpet mushroom) is one of the rare fungi, with comparative maturity of cultivation in Korea and Japan in greater production scale. In 2005 the variety was introduced into Zhangzhou.  In virtue of the pre-existing technical advantage in mushroom industry, so far the development has reached a certain scale and all in family workshops mode, altogether with comparatively simple equipments, management and technology. In Jiatian, based on original bag cultivation and market research, we have enhanced the technology, made investments and introduced production equipments from Korea, thus opening a new page of bottle cultivation of the King Oyster Mushroom.

1. Automatic production process is adopted in production lines, such as automated process of batching and mixing ingredients, bottling sterilization, etc.

2. Production Efficiency has been increased dramatically by introducing the advanced equipments from overseas, such as the bottling machines.

3. The corporate self-developed invention patent has been used in inoculations, a liquefaction inoculation technique based on substrates from grain culture medium. This is regarded as the first implementation of this kind in China.

4. The air conditioning circulation system of the mushroom house, with the technical innovation made by Jiatian, is more reasonable than that in Japan or Korea, in terms of wind speed and regularity control. 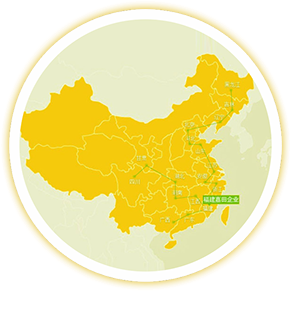 Nanjing County, located in southern Fujian, sits between the Special Zones of Xiamen and Shantou. The county is on the east of Zhangzhou City, With Longyan to its west, bordering Guangdong province, with State Highway 319, Zhangzhou-Longyan expressway and railway passing through (there are 3 entrances in the county). There is a distance of 30+ km from the center of the city, and 60+ km to the Zhangzhou Harbor, 90+ km to Xiamen International Airport or Xiamen Harbor. With an area of 1,962 square kilometers and population of 350,000, the county dominates 11 towns, 1 capital high-tech park and 1 capital development zone for overseas Chinese. It’s one of the key ancestral villages to many overseas Chinese and Taiwan compatriots. It’s also a national and provincial commercial grain base county, an exemplary county for the agricultural cooperation between Taiwan and Fujian, and regarded 1 of the 12 modern agricultural demonstration sites within the province.